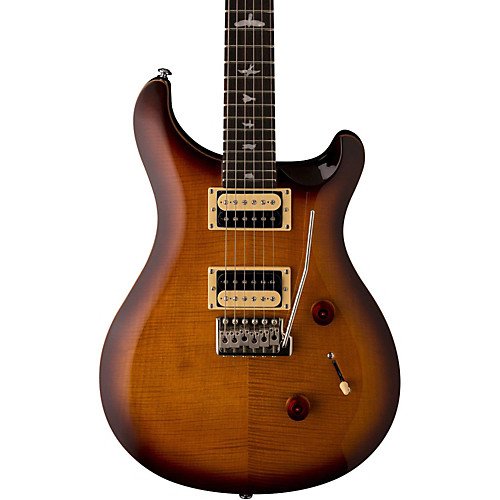 FREE SHIPPING
The SE Standard 24 is a fresh take on PRS’s flagship model, the Custom 24. The all-mahogany body provides a powerful voice and an impressive variety of tones when paired with the PRS-designed HFS and Vintage Bass pickups. The SE Standard 24 is a fresh take on PRS’s hallmark model: the Custom 24. Updated here with an all-mahogany body, the SE Standard 24 is a modern instrument with a powerful voice. This guitar features classic PRS appointments, including a 24-fret mahogany neck (set neck construction), rosewood fretboard with bird inlays, and a PRS-Designed tremolo. The SE Standard 24 pairs the warm, round tone of an all-mahogany guitar with PRS-Designed HFS and Vintage Bass pickups, resulting in a guitar that handles well and sounds as good plugged straight into an amp as it does run through a pedal board. The SE Standard 24 is the perfect choice players who demand a rock-solid, reliable guitar. Since 2001, the SE Series has been offering incredible quality and great tone at affordable prices. The introduction of the SE Standard models represents a significant extension of the SE Series into the < $ 500 price point. The goal of the SE Series has always been to provide a quality instrument to players of all levels – one that would not fight the player, but encourage him or her to start and to keep playing. PRS is proud to extend this promise to an even more attainable price point with the SE Standard lineup.